How I Got Started Programming

How old were you when you started programming? 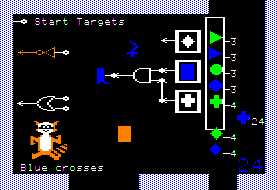 Officially, it was my freshman year of high school.  Unofficially, the most “programming” I did was modifying config files to get my PC games to run faster on our Gateway 386.  A favorite game of mine growing up was “Rocky’s Boots” on our Tandy 286 which involved completing electronic circuit puzzles.

How did you get started in programming?

I liked computers and my high school just happened to offer a BASIC programming class on old (even then) Apple //e’s.  After that I was hooked.  I think I inherited my dad’s creativity - his outlet is woodworking and construction.  I love to build things and doing it on a computer was the most logical step, since that’s where I spent all my time anyway.

My first programming job was a part-time gig during high school at an ad agency creating Access database applications for telemarketers’ data entry.

What was your first language?

Good old BASIC.  I quickly learned the evils of spaghetti code.  My final project for the BASIC class in high school was to do a “hi res” (80x48) animation.  It featured a bunny jumping through a static forest scene, a gun popping out from the side of the screen, shooting the bunny in the head.  Perhaps I was playing a bit too much Wolfenstein 3D?

Later on in high school, I moved through Pascal, C, and C++.  A past-time of mine in the computer lab was to create Myst-style dungeon crawlers using Hypercard.  There was always a secret spot to click to defeat the boss.

What was the first real program you wrote?

How do you define “real?”  My first for-money program was a simple Access database for telemarketers.  Of course, there is a minimal amount of programming involved there.  My college classes offered me plenty of interesting projects.  One was a series of programs written to compute large matrix multiplications over distributed systems using various threading/multiprocessing libraries.  A part-time job I had during college consisted of small web apps (mainly shopping carts, CRM) written in ColdFusion.

What languages have you used since you started programming?

By far, Ruby and Scheme have been my favorites.  Ruby’s flexibility, friendliness, and the way it so nicely complements TDD/BDD have won me over.  While I’ve never “monetized” my knowledge of Scheme, it was so much fun to think “functionally” to solve a problem.

What was your first professional programming gig?

Working for a contractor in Northern Virginia.  I worked on some C/C++ interfaces for USPS mail sorting machines and a system for nursing assistants to document nursing home care that involved a ColdFusion web app and a VoIP interface to an interactive voice system.  I learned quite a bit about the “real world” of programming.  At that time I was into creating “sugar castles” of code in my head and spent a lot of time fixing mistakes I thought I was incapable of making.  It was a good reality check.

If there is one thing you learned along the way that you would tell new developers, what would it be?

What’s the most fun you’ve ever had… programming?

My languages course in college - writing Scheme code.  Again, the functional paradigm is a lot of fun.  Hacking with others on fun side projects over pizza and beer is always a blast.  It’s the geek’s version of a jam band.